> People with 3D printers from all over Spain have participated by sending more than 600 gifts for elderly people in nursing homes. 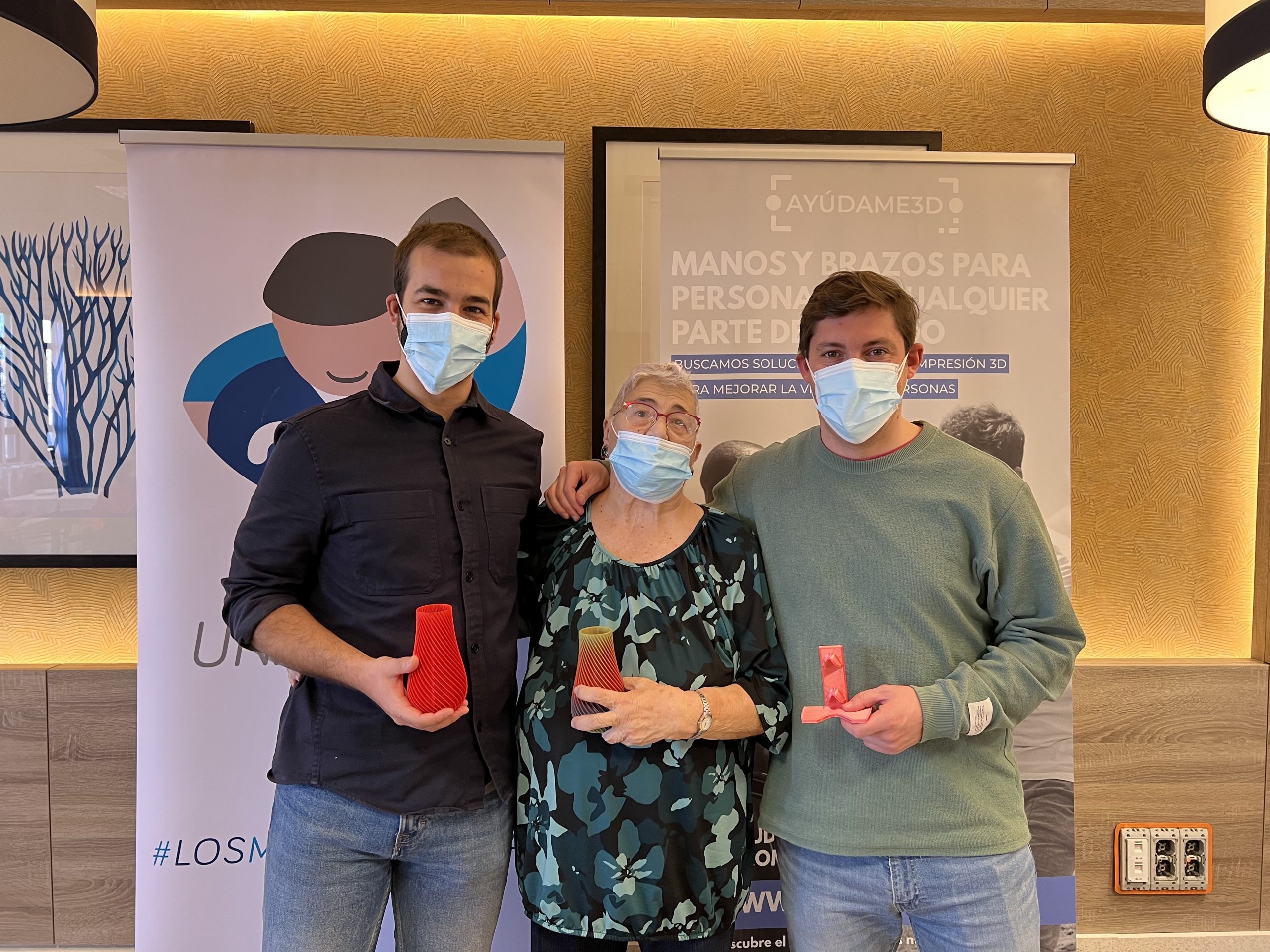 Last December, the association Adopt A Grandparent, y Help me3D launched a call on social networks encouraging people with 3D printers from all over Spain to make gifts for grandfathers and grandmothers in the residences that participate in the company's intergenerational programme. The aim of this initiative is to bring excitement and bring 3D printing technology closer to the elderly.

The campaign managed to collect more than 600 gifts in just one month. A total of 363 pairs of cufflinks, 175 glasses holders and 132 vases have already been distributed to different homes throughout Spain and were made thanks to some 40 people who wanted to collaborate from their homes to bring joy to the grandparents.

"I thought it was a small detail that I could contribute to making the elderly feel accompanied and loved. It has been very comforting for me as a person and has made me feel that there are still people who care about the elderly", says Ana Genis, a volunteer at the event. says Ana Genis, a volunteer with a 3D printer who has collaborated in this initiative by making the gifts.

For David Muñoz, another of the participants in this initiative: "Solidarity is something we should all practice more. We should give more to others, to the people who need it most.

Alberto Cabanes, CEO and founder of Adopta Un Abuelo, together with Guillermo Martínez, director of Ayúdame3D, went to the ORPEA Sanchinarro residence to deliver some of these gifts in person and share a moment with the centre's grandparents. In addition, during the day, they shared with the elderly different uses and how 3D printing works, as well as the social impact it can have. 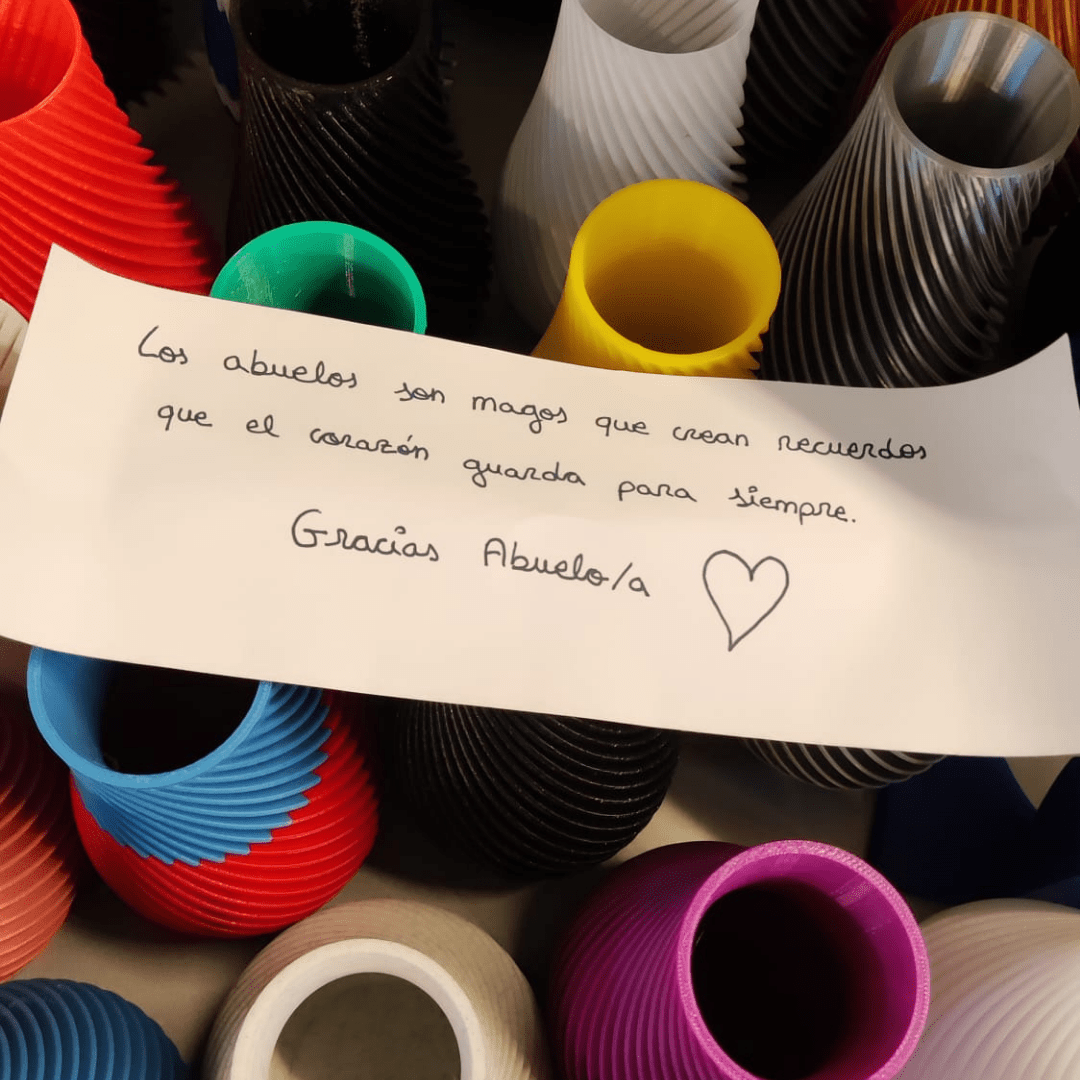 Ayúdame3D is an organization that promotes the social values of new technologies by creating awareness programs and providing aid through 3D printing. It has educational programs that seek to promote creative-resolutionary intelligence among young people, in addition to carrying out social awareness work. It also carries out CSR actions with companies to create a more ethical and supportive business environment, and has a platform of volunteers who are experts in 3D printing. All this in order to be able to distribute aid globally: trésdesis (3D printed arms for amputees around the world).

About Adopt A Grandparent

Adopt A Grandparent is an intergenerational companionship programme for elderly people who are at risk of loneliness. The aim is to make them feel listened to, accompanied and loved while the volunteers learn values and life experiences.

It was born in 2014 and, since then, it has become a social movement being awarded more than 21 times in the field of entrepreneurship and social innovation at national and international level. To date, they have carried out more than 44,900 hours of companionship to more than 3,500 adopted grandparents thanks to its community of more than 6,000 volunteers.

We use cookies on our website to provide you with the most relevant experience by remembering your preferences and repeat visits. By clicking "Accept all", you consent to the use of ALL cookies. However, you can visit "Cookie Settings" to give controlled consent.
SettingsAccept all
Manage consent

This website uses cookies to improve your experience while you navigate through the website. Out of these, the cookies that are categorized as necessary are stored on your browser as they are essential for the working of basic functionalities of the website. We also use third-party cookies that help us analyze and understand how you use this website. These cookies will be stored in your browser only with your consent. You also have the option to opt-out of these cookies. But opting out of some of these cookies may affect your browsing experience.
Necessary Always on
Necessary cookies are absolutely essential for the website to function properly. These cookies ensure basic functionalities and security features of the website, anonymously.
Functional
Functional cookies help to perform certain functionalities like sharing the content of the website on social media platforms, collect feedbacks, and other third-party features.
Performance
Performance cookies are used to understand and analyze the key performance indexes of the website which helps in delivering a better user experience for the visitors.
Analytics
Analytical cookies are used to understand how visitors interact with the website. These cookies help provide information on metrics the number of visitors, bounce rate, traffic source, etc.
Advertisement
Advertisement cookies are used to provide visitors with relevant ads and marketing campaigns. These cookies track visitors across websites and collect information to provide customised ads.
Others
Other uncategorized cookies are those that are being analyzed and have not been classified into a category as yet.
SAVE AND ACCEPT